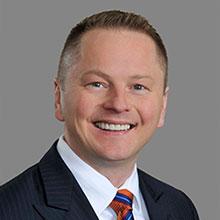 Darren
Hill
Third Vice-President
FCM Third Vice-President Darren Hill has been a councillor for the City of Saskatoon, Saskatchewan for 13 years. He’s the council lead on economic development, and chair of the Planning, Development and Community Services Committee.

Darren has been actively involved in FCM since 2007. As a long-time board member, he’s helped drive municipal leadership on resettling Syrian refugees and he’s served as a governance representative for Latin America. In June 2019, he was elected FCM’s Third Vice-President.

He believes strongly in the ability of local leaders to build better lives—whether that’s through better roads and transit, more affordable housing, or more livable, resilient communities. And he knows first-hand that they deliver local, cost-effective solutions to national challenges.

Darren was born in Saskatoon and still lives there with his family. As a former entrepreneur and advertising executive, he’s now the president and CEO of Junior Achievement of Saskatchewan, which teaches young people about entrepreneurship, business and leadership skills.