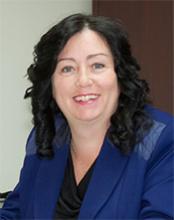 Vicki-May
Hamm
Past President
FCM Past President Vicki-May Hamm has been the mayor of the City of Magog, Quebec, since 2009. She also serves on the executive committee of the Union des municipalités du Québec (UMQ).

Vicki-May was elected FCM President in June, 2018. Her one-year term was marked by huge gains for local governments—and for FCM. Her leadership was instrumental in securing a doubling of this year’s federal Gas Tax Fund transfer, and an unprecedented expansion of FCM’s Green Municipal Fund.

Her success as FCM President showed what can be achieved when orders of government work together. That’s why she continues to be a strong advocate for modernizing the federal-municipal relationship to put the right tools in local hands to meet the needs of Canadians where they live.

Vicki-May has extensive volunteer experience and is a founding member of several community organizations, including the Centre des femmes and the Maison de la famille. In May, 2019, she was awarded the Francine-Ruest-Jutras prize by the UMQ, which recognizes women’s contributions to municipal politics and local governance.