Beaver Barracks is a two-phase construction project that provides 254 units of affordable housing and incorporates innovative sustainability features and technologies, such as geothermal heating and cooling, and a thermal-break system for balconies.

To help ease its chronic shortage of affordable housing, the City of Ottawa called for tenders to develop Beaver Barracks, the vacant downtown site of a former military facility. Centretown Citizens Ottawa Corporation (CCOC) bid successfully and constructed a $65 million development with units ranging from bachelor suites to three-bedroom townhouses available at market-rate and subsidized rents. The project also meets City criteria to include a community garden and ambulance station.

Established in 1974, CCOC is a community-owned tenant and member-directed private non-profit organization. With more than 1,550 units in 50 properties across downtown Ottawa, CCOC is a recognized leader in affordable housing. To fund the project, CCOC raised $12 million in municipal grants and incentives, and $11 million in federal grants, and secured mortgages of $31 million from a bank and $9 million from the province. 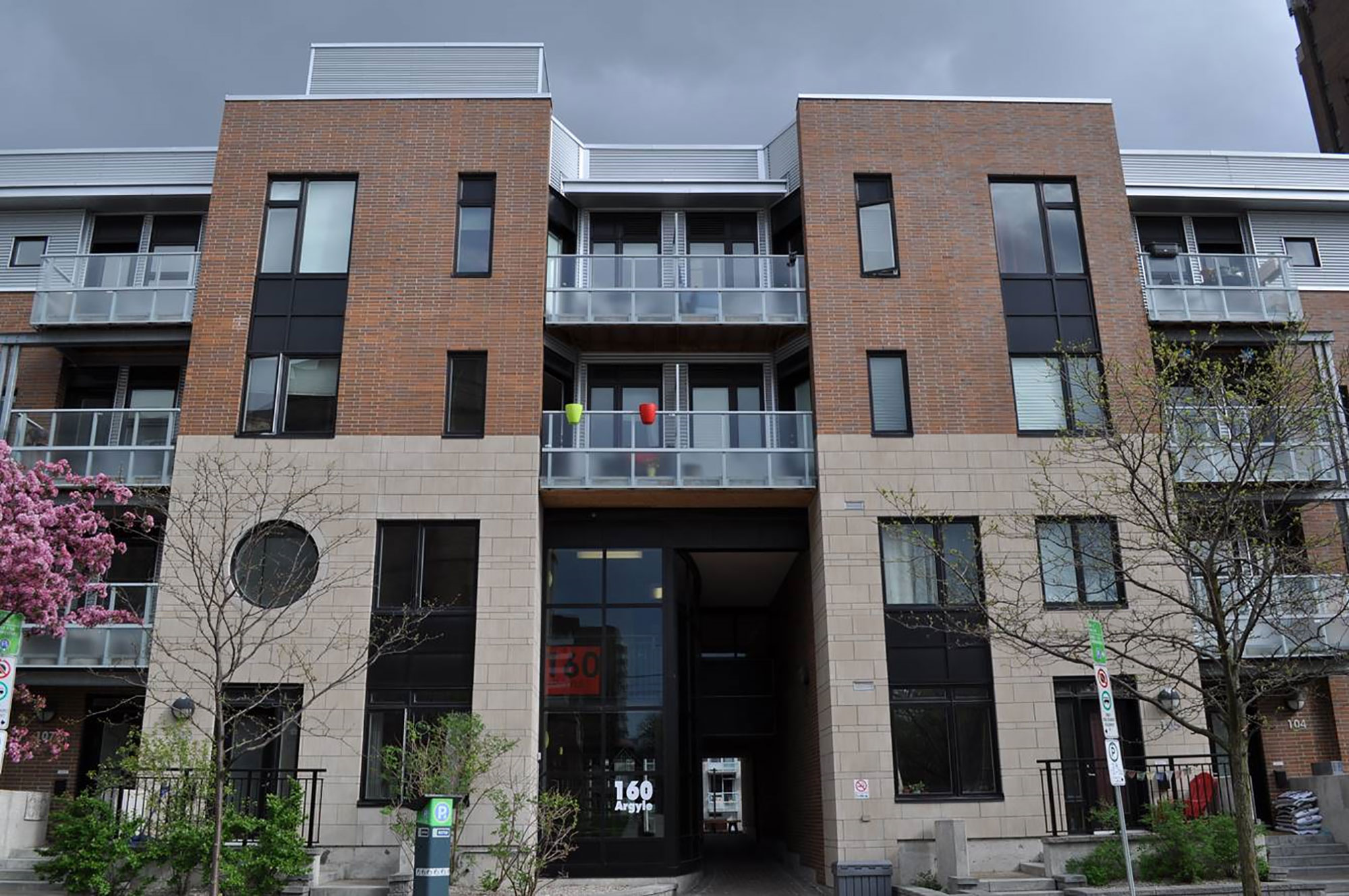 After winning the bid for the project and buying the land from the City for $1, CCOC hosted a two-day design charrette with community organizations, neighbours, residents, designers, engineers and architects. The charrette helped to establish design priorities, such as energy efficiency, reduced greenhouse-gas emissions and inclusion of community spaces. The participation of technical experts enabled careful consideration of proposed features. The idea of installing sunshades to reduce air-conditioning costs, for instance, was rejected when simulation models revealed that investing in other features would have greater impact on performance.

The two-phase project involved five buildings, including two mid-rise towers and three wood-frame buildings. Feedback from the tenants of the Phase I building inspired improvements to the second phase, particularly regarding finishes and barrier-free design.

The additional costs associated with incorporating energy-efficiency and sustainability features and technologies led CCOC to make several difficult decisions. CCOC planned to certify the project LEED Gold, although it chose not to pay the additional costs of certification, for instance. And to offset the costs (and risk) of owning and operating the geothermal plant, CCOC negotiated a 25-year agreement with Corix Utilities. Each tenant pays for the electricity consumed by the heat pump installed in each unit, as well as a fee to offset the cost of financing and servicing the geothermal system. 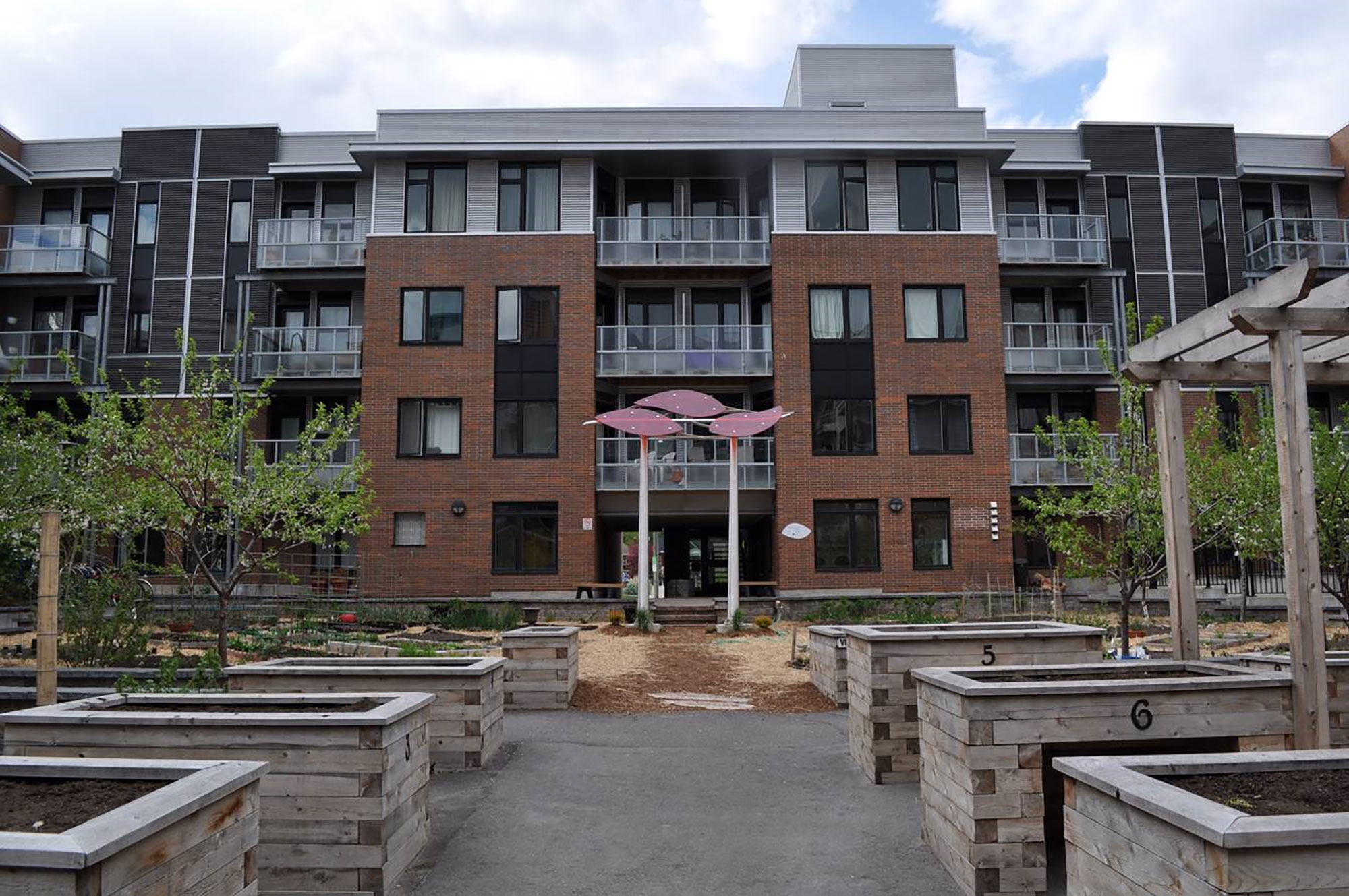 A Post-Occupancy Evaluation (POE) conducted by Dunsky Energy Consulting and funded by CMHC reviewed the project approximately three years after completion of construction. The POE covered a 15-month period and included a detailed analysis of energy systems during 12 consecutive months. A key metric was Energy Use Intensity (EUI): energy consumption per square metre of conditioned floor space. The EUI for Beaver Barracks was 50–65% lower than relevant Canadian and American database averages for similar facilities.

This advantage, however, did not lower total cost of energy for residents because of the fixed monthly geothermal fees. In fact, overall energy costs are approximately 20% higher than for an average Ottawa multi-unit residential building (MURB).

EUI, measured as equivalent kilowatt hours per square metre (ekWh/ m2), for Beaver Barracks was 50%-65% lower than relevant Canadian and US database averages for similar facilities.

Imbalanced heating and cooling loads are another cause for concern. Geothermal systems must balance heating and cooling loads for maximum efficiency and effectiveness. Beaver Barracks’ system, however, features a significantly higher cooling load. Engineering studies conducted after the POE identified several contributing factors, including summer temperatures that exceeded the baseline used to design the system.

Consultative design process improves results.
The two-day charrette identified several features that were incorporated into the project, including a storm-water irrigation system for an onsite community garden. In addition, the goodwill among residents and future tenants fostered by the charrette benefitted subsequent CCOC projects.

Third-party ownership of geothermal system can increase costs.
While energy performance and GHG emissions are both better than for comparable Ottawa MURBs, tenants pay higher utility costs due to fixed geothermal fees. CCOC and Corix share the risks associated with the geothermal system.

Involving multiple designers diminishes system performance.
Corix engineers designed the underground array and central energy plant, while CCOC contracted other engineers to design the distribution system, which includes heat exchangers and heat pumps. This division of duties may contribute to the system’s imbalanced heating and cooling loads, and the associated inefficiencies. Using a single team of engineers to design the entire system – from underground pipes to apartment heat pumps – might have produced better results. 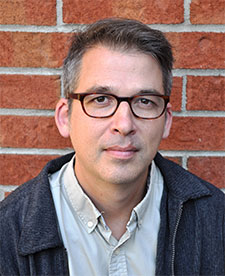