Bike paths are an anomaly in Nova Scotia, and this project was the largest component of the Cape Breton Regional Municipality's (CBRM) Active Transportation (AT) plan. In 2007–2008, it carried out public consultations, including focus groups, five public open houses and an online survey. An advisory committee met regularly after the study to monitor the project's progress. Its representatives included:

The path is expected to: 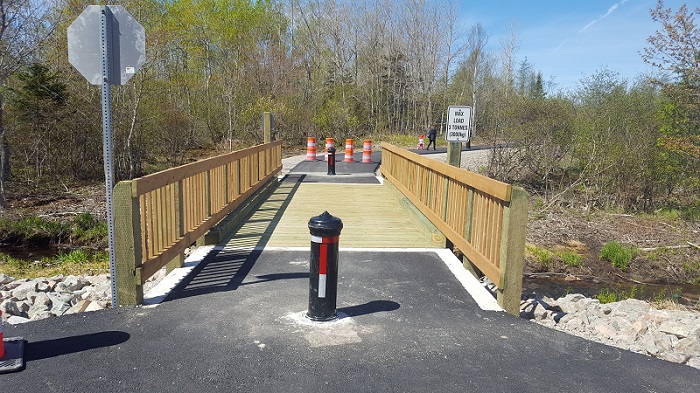 Many of their design suggestions were incorporated into the final plan

The 10-kilometre multi-use path links Sydney, Glace Bay and Cape Breton University. It's an off-road, AT corridor, where people can walk, bike, inline skate or skateboard with minimal vehicular interactions. It's a safe alternative transportation route in a corridor that was previously served only by the Grand Lake Road–a four-lane highway. The pathway is wheelchair accessible.

"I think this project truly showed that we can make huge improvements in our communities if we apply ourselves and commit to the implementation of our AT plan. My hope is that people will realize the potential we have in regards to converting existing rail beds and trails into functioning AT corridors."
— Malcolm Roach, Operations Supervisor, Public Works East, New Waterford and Area, Cape Breton Regional Municipality

This new route will enhance Mayflower Mall's economic viability by connecting it to nearby residential areas. It's the region's largest shopping centre. The 570 students living on campus can now access shopping and employment opportunities by bicycle, reducing their personal travel costs. Other students and university employees from Sydney and Glace Bay can now bike to campus.

"The feedback from our membership has been overwhelmingly positive... Though designed as a transportation corridor, it is proving to be recreational, especially for new cyclists and families with young cyclists."
— Andree Crepeau, Vice-President, Velo Cape Breton