The Town of Amherstburg, ON, consolidated three sewage service areas into one. This allowed the town to close down two sewage treatment plants – one was approaching approved treatment capacity limits and the other would have needed upgrades to meet current requirements for effluent quality.

The Amherstburg Pollution Control Plant (PCP), one of the only remaining primary treatment plants on the Great Lakes, is the largest of the town's sewage treatment facilities. It treats the majority of the sewage generated by the town's urban area but was approaching its approved capacity. Upgrades to the Amherstburg PCP included improvements to the headworks and screening as well as the grit removal, primary clarification and aeration systems. The town installed secondary treatment technologies, including bioreactor tanks with fine bubble diffusion and secondary clarifiers. The town also made improvements to the dewatering system and installed an ultraviolet (UV) disinfection system and an odour control system. 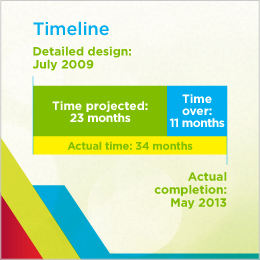 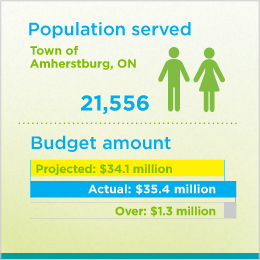 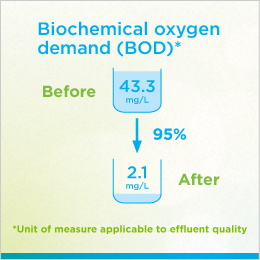 View of clarifiers and aeration tanks. (Credit: Town of Amherstburg)

Decreased water consumption: Treated wastewater is used for cleaning, washing or rinsing tasks in the plant. The surrounding area is landscaped with native vegetation, which is acclimatized to the existing local water conditions and requires minimal watering.

Minimized environmental impact: The town used the existing land efficiently and did not need to procure any additional land for the plant upgrade. Specifically, the raw sewage force main and final effluent pipe both connect to their respective existing counterparts, avoiding the need to build on a greenfield site.

Protection of biodiversity and ecosystem: The higher-quality effluent resulted in improved water quality in the river. In addition, the town built a greenbelt along the edge of a pond located next to the plant, to enable pedestrian access and protect the wildlife that inhabit the pond. The project has improved effluent quality and lowered the levels of effluent overflow into the Detroit River, helping to protect the biodiversity of the river and Great Lakes.

Protection and improvement of public health: Several surrounding and downstream communities in the Great Lakes area will benefit from the improved water quality and its impact on public health.

Increased access to public space: The upgrades have improved the river's water quality, leading to a reduction in beach closures. Residents and visitors can better enjoy local beaches.

Deferred or avoided capital expenses: The project team took advantage of past investments in the facility, making choices that were cost-effective and highly compatible with the existing infrastructure. The project also made use of the existing outfall, the pump station and portions of the raw sewage force main and effluent pipeline to the pump station.

Increased district land values: The town expects property values around the two former facilities to rise, which would provide the town with additional revenue from the increased property taxes. Property values surrounding the Amherstburg PCP are not expected to be adversely affected.

Increased potential to attract new businesses: The additional capacity of the updated facility will allow the town to issue building permits for the service area, facilitating economic development and community revitalization.

Increased ability to attract new residents: With increased capacity to support economic development and community revitalization, the updated facility will make the municipality more attractive over the long term as the city grows.

Support for local business development: The Amherstburg PCP will serve several new areas: A sizeable area identified for heavy industrial activity, a smaller area designated for light industrial activity and two other areas designated for residential use. Providing sewage services to these areas will allow for their development and resulting positive contributions to the local economy.

This project was a new facility. Technical highlights are current as of 2014.

Before:
After: Biosolids are dewatered via centrifuge, anaerobically digested and sent to landfill