The City of Barrie, ON, expanded its wastewater treatment plant to accommodate municipal growth and improve the quality of water flowing out of the plant and into the environment. The project expanded the plant's capacity for water pumping, biological treatment, solid separation, disinfection, sludge digestion and beneficial use of biogas. The city also added a new anoxic selector tank.

These upgrades have reduced the amount of phosphorus in the wastewater and helped to maintain acceptable levels of ammonia. The upgrades have also increased the plant's production of biogas, which is used for on-site generation of electricity to reduce energy costs. In addition, the project has contributed to the continued protection of Kempenfelt Bay and Lake Simcoe. 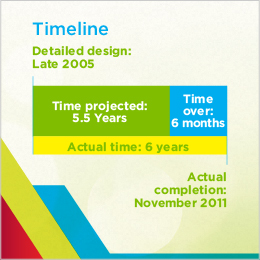 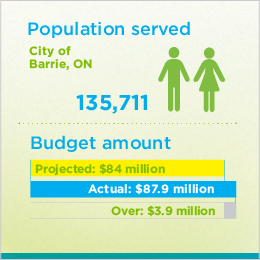 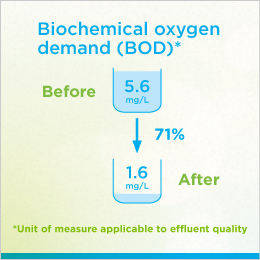 Use alternatives to lowest-bid procurement

Use effective communications and project management

Reduced energy consumption (electricity and natural gas): The city added variable frequency drives, which ramp up and slow down motors depending on requirements, reducing electrical demands.

Renewable energy generation: The plant generates more biogas as fuel because it is treating more wastewater. This allows boilers and co-generation engines to run more consistently (rather than intermittently) to generate heat and electricity for various treatment processes and winter heating.

Improved effluent quality: The city is able to comply with more stringent effluent treatment requirements. Effluent quality meets the Environmental Compliance Approval (ECA) targets set by the Ontario Ministry of the Environment and Climate Change. For phosphorus and ammonia, the targets are 0.18 mg/L and 4-10mg/L respectively (monthly averages).

Improved staff health and safety: The facility was nearing its hydraulic capacity, and therefore the equipment and tanks were nearing their capacities. Expansion of various process tanks has improved operators' ability to make small adjustments over longer periods of time.

The expansion also allowed for tanks to be removed from service for maintenance activities, which ensures continuous service and reduces maintenance closures for the wastewater treatment plant. Permanent cranes were also added to give staff the ability to lift heavy objects more safely; previously they used winches and chains.

Opportunities for physical and recreational activities: The project's new odour control unit has minimized odours emanating from the wastewater treatment plant. This in turn encourages more use of the waterfront.

Promotion of a sustainable lifestyle: The expansion project demonstrates Barrie's commitment to creating a vibrant downtown, managing growth through intensification and protecting the environment and health of Lake Simcoe.

Public space: A healthy Kempenfelt Bay is a showcase for Lake Simcoe and an important centrepiece of the community.

Improved conditions for tourism: A cleaner waterfront increases the city's ability to attract tourists, who generate revenue for area businesses.

Diverse sources of financing: The city was able to finance this project through revenue from utility rates and development charges, as well as through interim financing, debentures and a Green Municipal Fund grant and loan.

Decreased operating costs: The city installed high-efficiency motors for all pumps and mixers and high-efficiency UV bulbs to make the existing UV system more energy-efficient. The existing hydronic heating system, which uses the wastewater biogas for fuel rather than electricity or natural gas, was expanded, thus increasing energy efficiency.

Extended asset service life: The project expanded the capacity of the existing facility, saving the expense of building a new one.

Technical highlights are current as of 2013.

Biosolids that build up in the lagoon are removed every seven to ten years, and used for agricultural application.