To help meet phosphorus discharge targets set by the Bay of Quinte Remedial Action Plan and to sustainably handle both projected growth in the Picton-Hallowell urban area and septage from residents in the surrounding rural areas, Prince Edward County, ON, constructed a new pumping station and a new wastewater treatment plant (WWTP). The existing plant in the Town of Picton (in Prince Edward County), built in 1947, was approaching its rated capacity. Further in-service upgrades would have been difficult because of aging components, land use constraints and aspects of plant layout that limit the capacity to handle increasing peak flows. The new WWTP provides a greater level of wastewater treatment and meets more stringent effluent criteria by replacing chlorination with tertiary filtration and ultraviolet (UV) disinfection. The plant was built and is operated under the county's full cost recovery approach to municipal water and wastewater infrastructure — an approach complemented by continual promotion of water conservation. 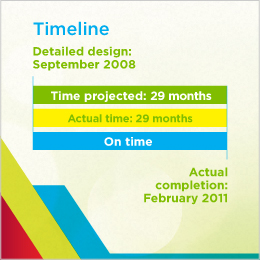 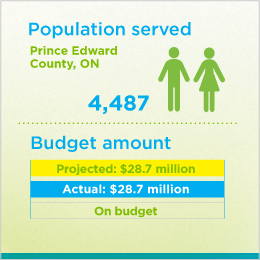 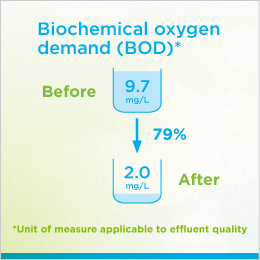 Use integrated teams and processes

Use alternatives to lowest-bid procurement

Improved public safety: The new facility is fenced and has security alarms to minimize crime and accidents.

Improved service delivery: The new WWTP provides more reliable treatment than the old facility, allowing for an overall reduction in bypasses and effluent non-compliance events. In addition, the plant has greater capacity to accommodate anticipated growth. It can also serve users whose households are not connected to the sewage collection system, providing a convenient and affordable means of septage disposal.

Creation of public space: Demolition of the old plant has improved the aesthetics of the surrounding space. The municipality plans to revitalize the space by turning it into parkland. Furthermore, the new plant is located further away from public recreation areas.

Protection and improvement of public health: With the new plant producing higher quality effluent, residents will have access to higher quality water.

Increased potential to attract new businesses: By increasing the treatment and reserve capacity, the county will be able to serve additional businesses.

Increased potential to attract new residents: By increasing the treatment and reserve capacity, the county will be able to support a growing community.

This project was a new facility. Technical highlights are current as of 2013.

Biosolids management: Stored liquid biosolids are treated and thickened to produce dewatered biosolids, which are hauled away from Prince Edward County to either a landfill or a composting facility.