Run-away inflation and new roles for municipal elected officials are placing unprecedented challenges on Jordan. Consequently, Jordanian authorities have reached out internationally for help in building municipal capacity, and the LGMA has stepped up to the plate.

LGMA is a key strategic partner in FCM’s JMSP (Jordan Municipal Support Project). The project aims to improve municipal services and support municipalities in developing leadership and governance skills. Jordan’s new federal government has adopted a policy of decentralization that favours the mobilization of municipalities and the engagement of citizens in community life.

As part of Jordan’s new strategic approach, the country’s Ministry of Municipal Affairs (MoMA) is supported by JMSP to establish the country’s first Municipal Training Institute (MTI). As the go-to organization for BC municipal managers seeking professional development, LGMA is the logical choice for the initiative.

The pressures on Jordan are tremendous. Jordan is steeped in a rich heritage and tradition that attracts millions of tourists every year, yet in many parts of the country it struggles with issues such as solid waste disposal, sewage treatment and drinking water.

In July 2018, LGMA representative trainer Allison Habkirk—an adult learning specialist—joined Gordon Barnhart and Laurent Mougeot, both from Saskatchewan, on a reconnaissance mission to Jordon in support of project start-up. They reviewed the Jordanian local government framework and responsibilities for strengthening the municipal sector as well as recent and existing initiatives related to the training of Jordanian municipal staff and elected officials. They also identified best learning approaches in the Jordanian context. Their recommendations helped lay the foundation for the establishment of the MTI.

Four representatives from LGMA were dedicated to the success of two subsequent technical missions. For the first one, specialists from LGMA included Habkirk, who in addition to being a learning specialist is a municipal planner and a former mayor; Brenda Gibson, a retired local government specialist with significant municipal ministry experience and who also worked for the elected officials’ association in BC; and Paul Murray, an LGMA trainer with experience as both a municipal chief administrative officer (CAO) and chief financial officer. Their October 2018 mission focused on recommendations for an MTI business model and operational structure consistent with Jordanian legal and legislative frameworks. A draft strategic plan and recommendations for an education and training plan were also provided to ensure the MTI could be launched.

In early 2019, Gibson, together with Elizabeth Brennan, LGMA’s Program Manager, and Linda Adams, a trainer for elected officials and a former municipal CAO, conducted a second technical mission. The core objective was to test the methodology of the curriculum development and delivery, which was done in a pilot knowledge-sharing workshop. In dong this, LGMA and JMSP teams worked with Jordanian municipal practitioners, including current and former mayors, elected councillors and executive managers, along with staff from MoMA and the Cities and Villages Development Bank. Workshop participants tested and evaluated the curriculum pertaining to elected and administrative roles and responsibilities. They also tested and evaluated the learning plan and adult learning methodologies. Additional mission activities included planning and participation in a roundtable discussion with Jordanian women in senior municipal staff positions and reviews of pertinent laws and requirements.

LGMA remains committed to the project and is poised to continue helping in the future so the new training institute becomes fully operational.

It’s an honour for the Local Government Management Association (LGMA) of British Columbia to be asked to help Jordan build municipal capacity by supporting the development of its Municipal Training Institute. Jordan has made decentralization and capacity development of municipal elected and staff priorities, and we are proud to offer our experience to assist in this work.
- LGMA Executive Director Nancy Taylor 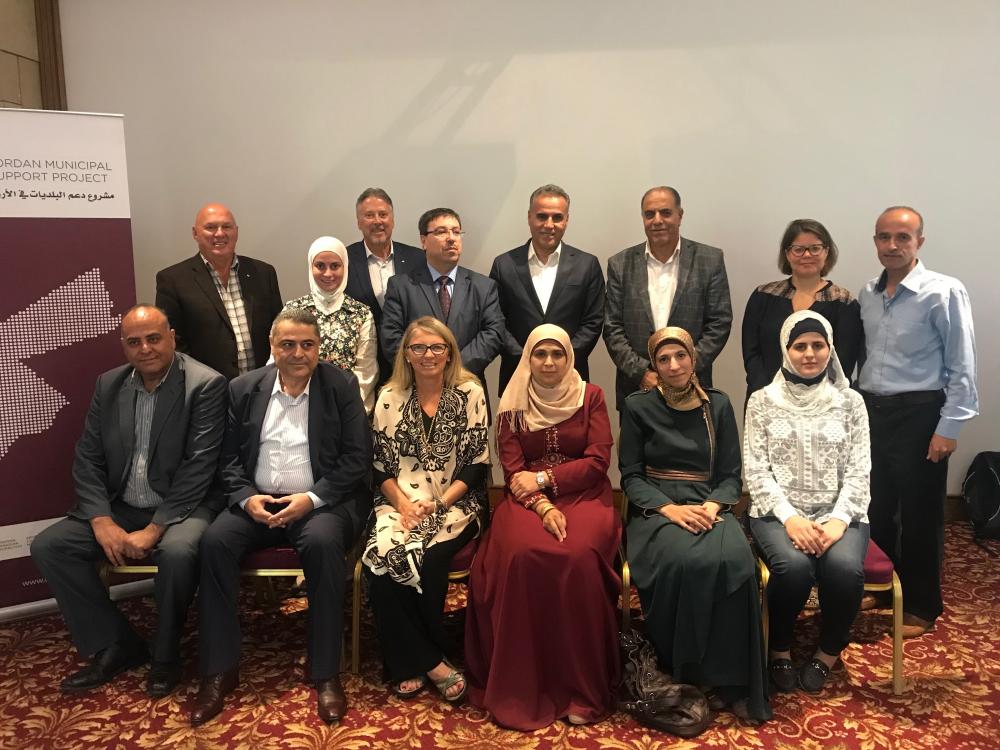 This project is funded by Global Affairs Canada and implemented in partnership with Jordan’s Ministry of Local Administration.