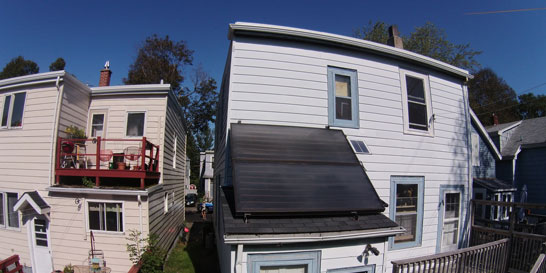 Halifax is a leader when it comes to energy efficiency and the environment, and I know our citizens are equally involved in efforts to help reverse climate change. We owe it to our children and grandchildren to do everything we can now to ensure they inherit a better world tomorrow.
— Mike Savage, Mayor, City of Halifax

The City of Halifax adopted its corporate plan to reduce emissions in 2008 and by 2011 had achieved Milestone 5. By that time, the city had reduced greenhouse gas (GHG) emissions by more than 10,000 tonnes per year through a combination of energy efficiency retrofits and more efficient building designs. Adopting renewable energy systems (geothermal and solar) and converting its traffic signals, as well as some streetlights, to LEDs also helped to reduce emissions.

In 2009, the city created a sustainable building fund to redirect energy cost savings from these initiatives toward funding for future projects. Since then, the fund's annual energy savings deposits have grown from $350,000 to over $750,000, and have helped to finance millions of dollars' worth of energy upgrades, including those undertaken through the city's Solar City initiative. Through this award-wining program, homeowners can take advantage of municipal financing to install solar-powered water heating systems, which lead to lower energy bills and reduced water consumption. To date, more than 350 homeowners have installed the systems.

The city received support for Milestones 3 and 4 from FCM's Green Municipal Fund (GMEF 5248 and GMEF 5285).

The BMO Centre is Canada's most energy-efficient four-rink arena. Waste heat from the facility's refrigeration system heats shower water and locker room floors, and provides additional space heating. The BMO Centre produces approximately three times the heat required for facility operations, so Halifax is investigating a small district energy system in the neighbourhood to make use of this excess heat.

This $3.6 million energy retrofit services five municipal buildings and is the first large-scale application of geothermal seasonal cold-energy storage in the world. It features a geothermal borehole system with a heat exchanger design that is 300 per cent more efficient than traditional designs. The system harvests cold energy from seawater during the winter to chill an underground rock mass, then uses the stored thermal energy to meet summer cooling needs. THE CITY partnered with the provincial government and the federal Technology Early Action Measures program to undertake the project.