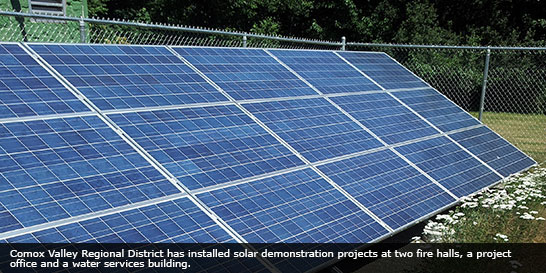 Through the implementation of our corporate energy plan, the CVRD was able to exceed its corporate greenhouse gas (GHG) reduction target and achieve carbon neutrality. We continue to do this by purchasing verified carbon offsets and supporting local GHG reduction projects. We are committed to being a leader in this area by continually working towards reduced corporate GHG emissions and implementing programs that enable community GHG emissions reductions.
— Bruce Jolliffe, Comox Valley Regional District Chair

In 2010, the Comox Valley Regional District (CVRD) completed the Comox Valley Sustainability Strategy (CVSS). The plan was the result of a joint initiative of the CVRD, the Village of Cumberland, the Town of Comox and the City of Courtenay, and will guide the policies and plans of the regional and local governments for decades to come. It outlines a broad sustainability approach as well as recommendations for specific actions to be taken by local governments, community organizations and citizens. The District received support for the Comox Valley Sustainability Strategy from FCM's Green Municipal Fund (GMF 9750).

Among the recommendations put forth in the sustainability strategy, the CVRD has moved on a number of measures, including completing a home energy incentive program, installing renewable energy demonstration projects, and improving active and sustainable transportation amenities such as new transit shelters, bike racks and cycling signage.

In 2011, the CVRD adopted a Corporate Energy Plan, which identifies specific actions to be implemented as well as a strategy for monitoring and reporting on those initiatives. The District is also a signatory to the B.C. Climate Action Charter, which commits local governments to becoming carbon neutral in their operations and to creating energy efficient communities.

Retrofits save on energy at Comox Valley Sports Centre

As one of the highest energy consumers in the District, the Comox Valley Sports Centre underwent a series of energy efficiency retrofits starting in 2013. The CVRD worked with BC Hydro and FortisBC to determine the facility's baseline energy use and recommend improvements. Retrofit measures to date have included updates to mechanical systems, such as variable frequency drives on pumps and new air handling units, as well as new lighting and controls. A recently updated energy assessment by FortisBC showed that reclaimed energy from the ice plant could be used for pool water and space heating, and the CVRD is securing funding to implement that measure.

Four solar photovoltaic (PV) systems were installed as demonstration projects in early 2013 at the Oyster River and Fanny Bay fire halls, the Royston south sewer project office, and the Little River water services building. All four installations were connected to the electricity grid via BC Hydro's net metering program. Under the program, the CVRD receives a credit on their account when the photovoltaic systems generate more electricity than is used by the building.

A full two years of operational data from these facilities have confirmed the viability of solar PV systems in the District. Tours, open houses, informative videos and live monitoring of electricity production help the regional district promote the potential of solar energy to the community.

The CVRD offered a home energy incentive program in 2013 and 2014. During the second year of the program (February-December 2014), the District offered local residents a free home energy assessment. Energy advisors first conducted a blower door test and a home inspection to identify air leaks around doors and windows. Where feasible, the energy advisor then sealed the leaks and conducted a second blower door test to measure the change. Advisors also provided information on where additional energy savings could be found. This program has now ended and the CVRD is partnering with the province on a similar program that will target houses using heating oil. This is an important initiative for the District's rural areas, where 50% of building emissions are from the use of heating oil, and natural gas is not available.