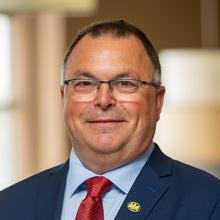 In addition to being very active on his own council, Geoff has been on FCM’s Board of Directors since 2017. He believes deeply in engaging and listening—and in the vital role local leaders play in shaping the national agenda. Geoff is proud to have sponsored a resolution on active transportation at FCM’s annual general meeting in 2018, which helped to influence the federal government’s landmark active transportation strategy.

Geoff and his wife Joanne—along with their two children and five grandchildren—enjoy camping, walking, cycling and music.

View more on the Municipality of the County of Colchester website.