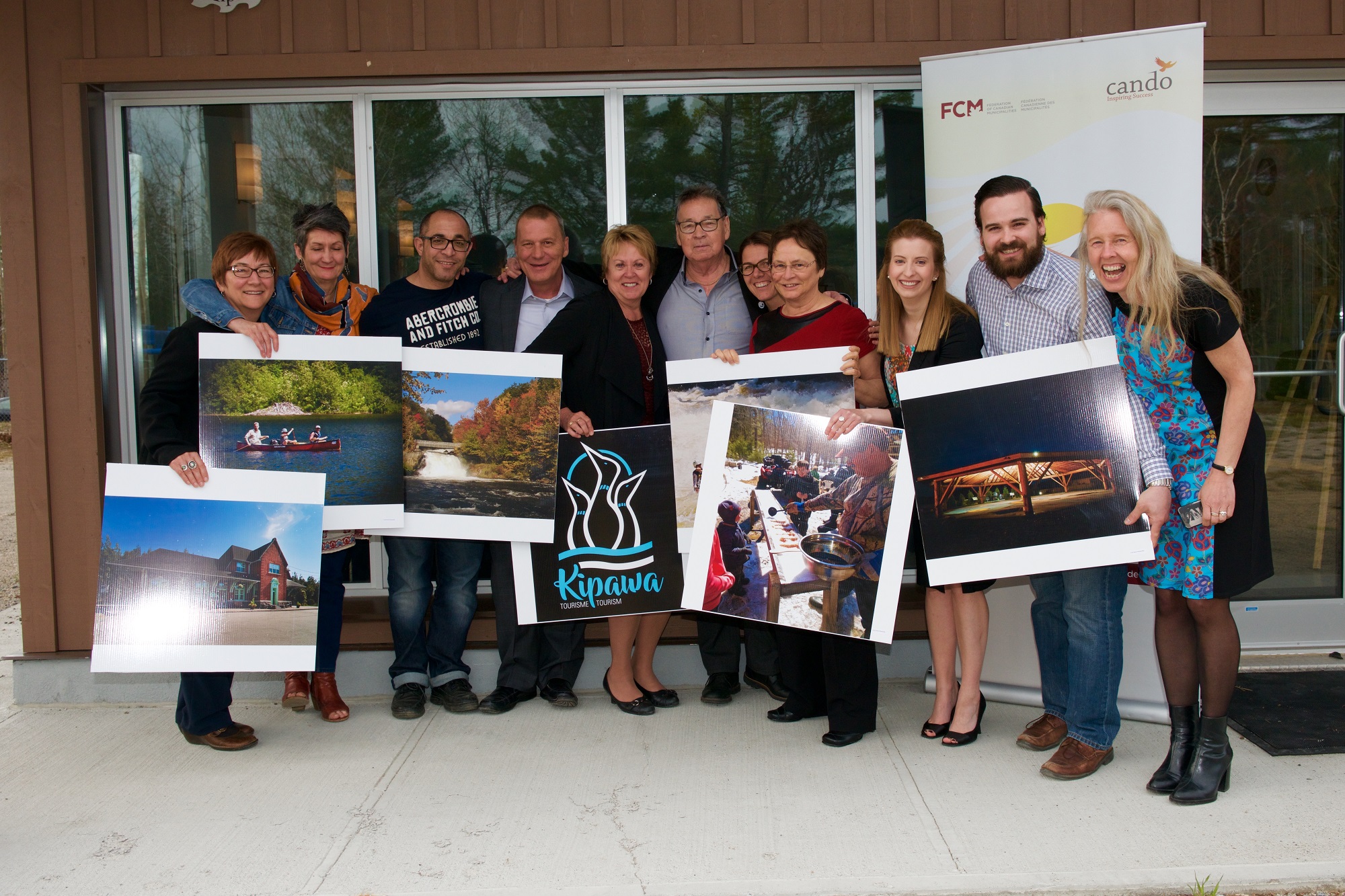 The First Nations–Municipal Community Economic Development Initiative (CEDI) is a joint project of the Federation of Canadian Municipalities (FCM) and Cando (the Council for the Advancement of Native Development Officers). From 2013 to 2016, the initiative worked with six community partnerships across Canada in urban, rural and remote settings. Hundreds of communities expressed interest in collaborating with this unique initiative and as a result, FCM and Cando are currently implementing a second phase of CEDI until 2021.

In 2017, CEDI staff visited one of the partnerships located in western Quebec. Through CEDI (Phase 1), Kebaowek First Nation (formerly Eagle Village First Nation), the Town of Témiscaming and the Municipality of Kipawa developed a tripartite friendship, agreed to pursue a shared tourism strategy and started to explore a coordinated approach to regional economic development. The CEDI toolkit includes a case study outlining the history and milestones of the partnership. The last activity of the partnership under CEDI support took place in June 2015, but the tripartite collaboration continues to flourish and grow.

First Nations–Municipal Collaboration is Groundwork for National Truth and Reconciliation

In 2013, the Town of Témiscaming (population 2,385) and Kebaowek First Nation (261 on-reserve and 568 off-reserve) described the state of their relationship: “We live next door to one another yet don’t necessarily know each other; we coexist.” In the wake of the national Truth and Reconciliation process, this situation remains all too common across the country.

Témiscaming and Kebaowek are located on the traditional territory of the Algonquin Nation, in a resource-rich region of Quebec, approximately 70 kilometres northeast of North Bay, Ontario. The two communities were concerned about their dependency on the forestry industry and saw the opening of a new provincial park, Opemican Park, as a way to support tourism growth. They decided that a regional approach would better attract tourists and asked the nearby Municipality of Kipawa (population 474) to join them. They developed a joint vision statement to guide their collaboration. “We want to create a memorable experience by welcoming visitors to share our natural beauty, cultural heritage and friendliness.”

While it seemed that conditions favoured a successful venture, the partnership had a difficult start because the three communities held opposing views over a proposed mine in the region. Over the course of several months, through openness and mutual commitment, community leaders managed to overcome this barrier. They “agreed to disagree” on the rare-earth mineral mine project. The CEDI Dialogue Principles were instrumental to that process. These communities came to better appreciate their respective histories and issues, and the need to collaborate to build a better tomorrow.

Trust and respect were built over time. During ameeting, Chief Lance Haymond repeated these two words. He explained, “Understanding and educating is the biggest part of the Truth and Reconciliation. Fighting prejudice. Few people know the contribution that First Nations have had for the development of Canada.”

This sentiment resonates with his counterparts. Nicole Rochon, Mayor of Témiscaming, said, “Understanding the Indigenous culture has helped me realize some of the constraints and challenges that the Band Council has to deal with. This remains true today. They have to manage everything, including contracting and paying the nurses. We don’t have that responsibility as a municipality.”

By 2016, at the end of their formal involvement in CEDI, the partners had accomplished the four milestones. The foundations of friendship were in place. A tourism strategy had been adopted. And a series of key objectives were in sight:

The completion of the four stages of joint First Nation-Municipal CED is not the end of the process; rather it marks the start of a new way of thinking about, and working with, neighbouring communities. Long-term success depends on making joint CED the new normal in communities:

More than Economic Development, CED is Vital to Social Inclusion and Wellbeing

Chief Haymond knows his community thoroughly. He speaks persuasively of the prejudices of social welfare and challenging circumstances. He points to the legacy of residential schools. He knows the responsibility and small window of opportunity for the five remaining elders in his community, aged between 60 and 86 years old, to pass on their language and culture: the traditions, the names of the lakes, the knowledge of the land. Community development is complex and there is much at risk.

Adding to the challenges are complicated jurisdictions, legal and fiscal arrangements, and accountability mechanisms that can make development processes cumbersome. As Chief Haymond explains, “In Canada, we have Indigenous communities that have a legal relationship with the federal government and municipalities that work under the jurisdiction of their provincial municipal acts.” These dynamics create boundaries and silos, resulting in neighbouring communities that cannot easily collaborate. People circulate freely on the land and through the towns, but social issues create islands of solitude.

One case in point is the segregation of school systems. Throughout the history of the three communities, English and French school systems were planned separately with children divided by language and culture. As a result, children living in the same neighbourhood did not play together. Racism and intolerance feed on ignorance.
While municipalities are not responsible for schools, Témiscaming, Kebaowek and Kipawa have started to advocate together for change with the school boards. These issues affect everyone, and the communities are finding strength and leverage with stakeholders through collaboration.

Chief Haymond acknowledges that the partnership has come a long way, and that it was not always easy. “Through dialogue and mutual respect, and cooperation, we are starting to see the benefits.  The more we talk, the more we realize that we have things in common.”

From Coexisting to Long-term Collaboration

At the forefront of the collaboration with Témiscaming and Kipawa, Justin Roy, Director of Economic Development for Kebaowek First Nation, has seen the relationship develop from its early stages. “We haven’t missed a single meeting of our committee since it started. There are a lot of moving parts to our collaboration. We don’t want this to go off the road!”

CEDI provided the technical support, the advice and the encouragement to break down barriers and create relationships. “With time, we build trust,” said Roy. “Trust that gets bigger and better. That’s the biggest thing we’ve got from the project.”

Reflecting on the lessons learned from the CEDI project, Roy spoke of open communication and transparency as key to success. Trust and friendship were built by:

“Tourism is a nice, clean industry that we can all take part in,” said Amanda Nadon-Langlois, Tourism Development Officer at Kipawa Tourism, and it is also a strong ground for long-term collaboration.

FCM and Cando were invited to an event to launch the logo of Kipawa Tourism in spring 2017. The logo features three proud loons, standing together heads high under a shared horizon: a beautiful and powerful representation of the relationship that is developing amongst the three partners.

“We are three cultures here: the Algonquins, the French descendants, and the English descendants. We work together. We play together. And we build our future together,” said Norman Young, Mayor of Kipawa. “You cannot work with someone if you don’t know them. The road that we have walked together over the years has built great friendship. We started with the idea of tourism. But now, we’re starting to think about other things.”

An addition to the reserve, growing the snowmobile and bike trails, and developing commercial activities are on the radar, said Justin Roy. Through their collaboration, the communities have been able to attract three doctors. “We see new leaders emerging. We see new faces, younger people. We discuss new things that I don’t think we would have been able to discuss just a few years ago. This is making our communities better.”

At the Kipawa Tourism launch event, all partners acknowledged CEDI’s important contribution to enable and nurture their relationship.

Helen Patterson, CEDI Project Manager reminded guests and partners, “We asked you to show us the way for Canadian municipalities and First Nation collaboration. You have demonstrated rigour, commitment and dedication. Congratulations on your success! Thank you for being the example.”

The launch event culminated with a preview of the promotional video developed as part of the tourism strategy. With the fitting theme “At the heart of nature,” the three communities are poised to take flight into their future.