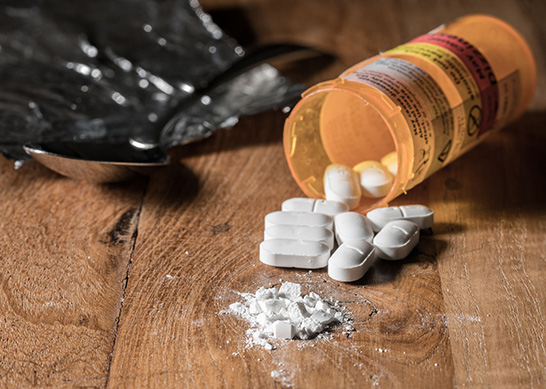 More and more Canadians are dying from opioid overdoses. Cities and local first responders are on the front lines—reviving people from overdoses, distributing overdose-prevention drugs, and educating the public about the dangers of illegal opioid use.

In February 2017, FCM’s Big-City Mayors’ Caucus launched a task force to share best practices and save more lives.  And in May 2017, the Mayors’ Task Force on the Opioid Crisis put forward comprehensive recommendations for coordinated, nation-wide action by all orders of government. That includes action on all four pillars of Canada’s drug strategy: harm reduction, treatment, prevention and enforcement.

The scope of the crisis

Opioids are medications that are often prescribed by doctors to relieve pain. They are also highly addictive and can be dangerous if misused. Fentanyl is an opioid, as are oxycodone and morphine. Prescription-grade fentanyl is up to 100 times more potent than morphine.

In April 2016, British Columbia declared a public health emergency over the alarming number of people dying from fentanyl overdoses. There were 914 overdose deaths in BC in 2016, with 120 suspected drug overdose deaths in March 2017 alone. It is estimated that at least 2,300 people have died of overdoses in Canada since 2015.

According to a statement by Health Minister Jane Philpott, at the Harm Reduction International Conference in May 2017. “The death toll is worse than any infectious epidemic in Canada (including the peak of AIDS deaths) since the Spanish flu a century ago.”

While access to standardized and up to date data is lacking, fentanyl is noted as the leading cause of drug overdose death in one-third of the 13 cities making up the Task Force. And the crisis is steadily growing across the country.

Many of our cities are already implementing and sharing strategies to prevent opioid overdose deaths—including the promising practices described here.

Naloxone is a drug that can temporarily reverse an opioid overdose, buying precious time to get people to hospital. It is fast-acting, works for between 20 and 90 minutes, and has minimal side effects.

Cities are working hard to make naloxone available to those who need it. Programs to encourage the wider distribution and use of naloxone show promise in reducing overdose deaths. Cities including Calgary, Saskatoon, Vancouver, Montreal and Surrey are making naloxone available for free to anyone who discloses a history of opioid use. In Ontario, some pharmacies are offering free overdose kits.

Almost all cities that the Task Force surveyed report that their police, fire and paramedic services are supplied with and trained to use naloxone. And some cities are supplying other professionals with overdose kits, including courthouse first aid attendants (Surrey); supported housing staff (Vancouver); and corrections officers (Surrey).

Public health officials say that if a person overdoses, bystanders should call 911, even if they were able to administer naloxone—because it wears off in 20-90 minutes. Some people do not call for help because they fear they will be judged or arrested, that their drugs may be seized, or that they may lose custody of children.

Because of these concerns, and because an overdose is a health concern rather than a criminal one, many Canadian cities no longer send the police to overdose calls, so these calls are managed by their fire and paramedic services.
In the spring of 2017, Canada’s Parliament passed “Good Samaritan” legislation that, once implemented, will protect people from criminal repercussions when they call 911 after an overdose.

Some Canadian cities issue alerts to inform harm reduction service staff and people who use drugs about recent spikes in overdoses or the presence of tainted drugs.

The City of Montreal has implemented a number of successful tools in order to ensure that people who use drugs are aware of crises when they occur. Messages go out via:

Several cities across Canada are beginning to implement stronger information-gathering and communication tools in response to the opioid crisis.

As part of the federal response to the opioid crisis, the Government of Canada developed wallet-sized cards to distribute at music festivals and clubs. The cards list common signs of overdoses, including blue lips, dizziness and confusion and slow or weak breathing. It reminds people to call 911 and administer Naloxone if they suspect someone is overdosing. It also reinforces the fact that Canada’s new Good Samaritan law protects people from being arrested for drug possession if they call authorities to help save someone from an overdose.

What needs to happen next?

We need a coordinated, nation-wide response to the opioid crisis—before it becomes a nation-wide epidemic. On May 25, 2017, the Mayors’ Task Force on the Opioid Crisis released comprehensive recommendations to the federal government to make that happen.

The Task Force is calling for a pan-Canadian action plan with timelines and targets, spanning all four pillars of the national drug strategy:

As Task Force members revealed in April 2017, significant data gaps are standing in the way of evidence-based solutions. They are calling for a pan-Canadian standard for collecting and reporting overdose data—with a progress report by September.

All orders of government also need to work together to address roots of addiction, with supportive housing, action on homelessness and access to crucial social services.

Read the full recommendations of the Mayors’ Task Force on the Opioid Crisis.