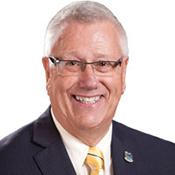 Bill
Karsten
President
FCM President Bill Karsten is a councillor for the Halifax Regional Municipality, Nova Scotia. He was first elected to council in 2004, and has since been re-elected three times. He represents the residents of District 3 (Dartmouth South–Eastern Passage).

In 2016, Bill brought his commitment to community-building to the national stage, and was elected FCM Third Vice-President by municipal leaders across the country. He served FCM members diligently for three years before being acclaimed FCM President in June, 2019.

Bill firmly believes in the collective role all municipalities play in building better lives. He has dedicated his public life to ensuring our communities are left stronger for future generations—with modern infrastructure, a cleaner environment and the right fiscal tools to achieve more for Canadians.

Born in Holland, Bill has lived in Dartmouth, NS, for 40 years. He and his wife Muriel are proud parents of two daughters and three granddaughters. Before entering municipal politics, he enjoyed a 30-year business career in sales, marketing and management.